Black’s Law Dictionary defines a "surveillance" as an oversight, superintendence, supervision. Police investigative technique involving visual or electronic observation or listening directed at a person or place (e.g., stakeout, tailing of suspects, wiretapping). Its objective is to gather intelligence about a person’s activities.

Wiretapping is illegal. As for the remainder of the definition, Jensen Private Investigations conducts all forms of surveillance. Surveillance work can be critical in cases going to court. 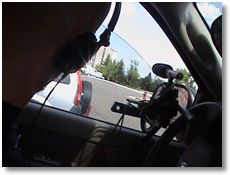 For instance, let’s assume you are getting a divorce and you are fighting over custody of your children. Your spouse claims he or she is not taking the kids overnight to the boyfriend or girlfriend’s house. Your attorney can argue all he wants, but unless you show the judge a video tape of the activity or other competent legal evidence, you may not prevail.

Others who have already been divorced will tell you its "he said, she said" in trial. Take charge of your case now by getting the evidence your attorney needs to assure a victory.

The situation described above actually just recently happened in Salt Lake City, Utah. Don’t try to get the evidence yourself. As a matter of fact, after video evidence was obtained the boyfriend found out and he tried to run Mr. Jensen off the road. Surveillance work can be dangerous, don’t try it yourself. Hire a professional private investigator.

Mr. Jensen has the video and audio equipment needed for both day and nighttime surveillances, including covert body cameras.

Self-explanatory. Don’t let a cheating spouse get you upset, they don’t deserve that reaction. We like to stop cheaters! If a relationship has to be a secret, they probably shouldn’t be in it. If you need the photographic or video documentation to confirm your suspicions of a cheater for Court, let Jensen Private Investigations help you. Mr. Jensen was insurance industry trained in conducting private detective surveillances. The surveillance techniques used are proven methods which are admissible in Court. Jensen Private Investigations is familiar with the Rules of Evidence, and the evidence is collected and managed in accordance with established protocols in the normal course of business. All of Jensen Private Investigation’s detective work is supported by an activity log and case manager report. 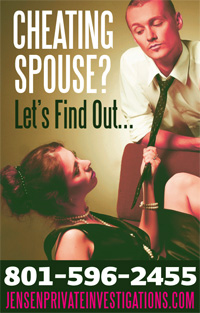 Also, there are semen detection kits available to purchase with costs starting as low as $45.00. Go to the Paternity Experts for more information.

In tough economic times, there are more individuals who become desperate to raise false claims. Experience has shown that busting these frauds is an effective deterrent for other false claimants, and has shown to curb rate hikes. Jensen Investigations daily rate for surveillance work is capped at $500 a day, plus the usual relevant expenses. These expenses are generally limited to fuel alone.