Get the evidence your attorney needs to win! ©

"We have learned the lesson of history, ancient and modern, that a system of criminal law enforcement which comes to depend on the ‘confession’ will, in the long run, be less reliable and more subject to abuses than a system which depends on extrinsic evidence independently secured through skillful investigation."

Jensen Private Investigations is your trial witness and document exhibit solution. Working closely with attorneys, our private investigators are leading the industry in criminal defense formulation, evidence collection and preparation, and trial presentation. We have access to other specialty assignment and forensic sciences.

Bear in mind that the traditional steps of records retrieval and witness interviewing remains the cornerstone of any private investigation and forms the backbone of the criminal justice process despite what you might see on television. 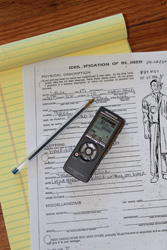 DON'T PLEAD GUILTY WITHOUT INVESTIGATING THE FACTS FIRST. It’s a well-settled fact that when defending the Government against charges brought against you, you need assistance in the collection of evidence to use in your own defense. Often times we find ourselves incarcerated so we cannot gather the evidence ourselves. Our services include the collection of police reports and the interviews of witnesses to secure the evidence needed to show innocence or to place doubt in the mind of the trier of fact, the jury. We all know full well that prosecutors and law enforcement do their best to keep defendant friendly evidence, known as "exculpatory evidence" from you. Despite the U.S. Supreme Court’s instructions requiring the disclosure of exculpatory evidence, the system has found loopholes to avoid fulfilling this requirement. We know most if not all of their tricks.

Black's Law Dictionary defines "exculpatory evidence" as evidence in the control of the Government which tends to suggest innocence or which may tend to mitigate the level of guilt.

Law enforcement and prosecutors are supposed to be familiar with the Brady Standard. In Brady v. Maryland, 373 U.S. 83, 87 (1963), the United States Supreme Court held that "the suppression by the prosecution of evidence favorable to an accused upon request violates due process where the evidence is either to guilt or to punishment, irrespective of the good faith or bad faith of the prosecution." This means if there is evidence which would be viewed as favorable to you, you are entitled to have a copy of it. In Tillman v. State, 128 P.3d 1123 (Utah 2005) the Utah Supreme Court reiterated "the duty to disclose favorable evidence is implicated even if the evidence is known only to police investigators and not the prosecutor, and regardless of whether the evidence has been requested by the accused."

Experience has shown that the disclosure does not come automatically, if you are not aware of it, you don’t make the request for it. A well-trained and experienced private investigator knows what to look for and how to identify that favorable evidence so that you or your attorney makes that Brady evidence request! If you are faced with criminal charges don’t delay, call today.

The most underappreciated use of the exculpatory evidence rule is for "mitigation."

An example would be when a police officer arranges a drug purchase through a confidential informant and it was the officer who sets the quantity . . . . By setting the quantity high you are likely to be sentenced for a longer term. Just what if that officer set the amount lower . . . what then?

Another example to illustrate this is in the case of a classic murder charge. In death investigations, law enforcement is trained to assume some one was intentionally killed just because there is a death and they can only determine "apparent cause" of death. (Fisher, 2004, pg. 380). Only the medical examiner or coroner should make the determination of actual cause of death. (Fisher, 2004, pg. 380). Even when the death is a suicide, the police must treat the scene and the body as if it was a homicide. (Fisher, 2004, pg. 380). For this reason police must consider why the person died, who’s responsible, and whether a potential killer had "staged" the crime scene to look like an accident or suicide, or to place blame elsewhere. (Fisher, 2004, pg. 380). The proper way for the investigators to conduct a death investigation is to diligently interview the friends and family, and review the decedent’s medical or psychological history, in addition to any witnesses of the death and scene.

But still, there is a difference between being responsible for the death and being a murderer even if at fault. Accidents result in fatalities all the time, look at automobile statistics. (U.S. Census Bureau). And people are accidentally killed by misuse of handguns frequently. (NRA). Presenting evidence showing the fatality was negligent or reckless rather than intentional will present the accused in more favorable light entitling him to manslaughter or even a reduction to misdemeanor rather than felony charges.

Often times a criminal defendant is innocent of the charges and his innocence may be proved by using the Scientific Method of Crime Reconstruction. Click on the link for more information.

Many alleged crimes are supported by cell phones, text message, and laptop computers. Jensen Private Investigations has the experience and tools for retrieving digital information through Cell Phone Analysis and Digital / Computer Forensics to use in a court of law. Click on the link for more information.

Jason Jensen is an expert in private investigation and procedure in the following areas.

Published by the National Institute of Justice:

Death Investigation – A Guide for the Scene Investigator

The Unrealized Potential of DNA Testing

What Every Law Enforcement Officer Should Know About DNA Evidence

Published by the National Highway Traffic and Safety Administration:

The History of the Automobile Exception to the Fourth Amendment

Causes of Crime: The Integrated Approach for the 21st Century

GET A PRIVATE INVESTIGATOR APPOINTED FOR FREE.

You probably already knew that if you can’t afford to hire an attorney the court will appoint you an attorney. You probably didn’t know that if you want a private investigator the court will appoint you one too. That is a little known fact, but is true (well at least in Utah). Private detectives and private investigators are needed to conduct witness interviews and collect evidence not otherwise made available to you or your attorney through Discovery Responses.

In State v. Carreno, a Utah Court of Appeals decision, that court addressed the issue of court-appointment of private investigators "for indigent defendants."

When society acts to deprive one of its members of his life, liberty or property, it takes its most awesome steps. No general respect for, nor adherence to, the law as a whole can well be expected without judicial recognition of the paramount need for prompt, eminently fair and sober criminal law procedures. The methods our private detectives employ in the enforcement of our criminal law have aptly been called the measures by which the quality of our civilization may be judged.

Recognizing the paramount importance of fairness in criminal trials, our legislature requires that "[e]ach county, city, and town shall provide for the defense of an indigent in criminal cases . . . [by] provid[ing] the investigatory resources necessary for a complete defense." Utah Code Ann. § 77-32-301(3) (2003). "Trial courts are required to appoint an investigator for indigent defendants when necessary for a complete defense." Hancock, 874 P.2d at 135. Yet, we have held that trial courts may place some conditions on the appointment of a private investigator. See id. at 135-36. In Hancock, we upheld a trial court decision that required the defendant to pursue other available means of investigation before appointing a private investigator. See id.

"The trial court’s determination of whether to appoint an investigator must always focus on the facts of the case and never on the expense of such an appointment . . . . Budgeting for such appointments is the responsibility of city councils, county commissions, and state legislatures," not trial courts. Id. at 135 n.3. "[T]rial courts should consider only the question of whether appointment of an investigator is necessary for a complete defense." Id. (emphasis added).

Because you are entitled one if the situation calls for a private investigator, Jensen Private Investigations can assist your attorney to have Mr. Jensen appointed at no expense to you. The State, County, or City would have to pay the investigation fees if you are indigent.

The Utah Association of Criminal Defense Lawyers (UACDL) is a non-profit organization that is dedicated to promoting and protecting justice by supporting the defense of the constitution and the rights of individuals.

UACDL carries out its mission by organizing educational programs for people involved in the criminal defense field, informing the public on criminal law issues, providing its members a forum for exchange of information, and teaming up with other organizations that promote the fair administration of justice, namely the National Association of Criminal Defense Lawyers, to which UACDL is an affiliate.

Jason Jensen is also a proud member of the Wyoming Trial Lawyers Association.